In 1859, there arrived in New Orleans from the Rhineland village of Rommersheim two ambitious young German immigrants named Frantz and Schoen. The former became a blacksmith and wheelwright while the latter established a carriage and livery business.

On March 4, 1874, Jacob Schoen and Henry Frantz started a family business at 155 N. Peters Street and adopted as their policy the ideal, “The highest standard of funeral service to all, regardless of financial circumstance.”

Thus recorded the founding of what was to become Jacob Schoen & Son, Inc., a family of Funeral Directors that has served New Orleans area families for five generations and whose facilities have grown to serve the families of Orleans, Jefferson, St. Tammany Parishes. The business soon outgrew the original N. Peters Street funeral parlor, situated between Montegut and Clouet, and in 1879, the firm moved to 527 Elysian Fields.

In 1897, Frantz sold Jacob Schoen his interest in Frantz and Schoen. Jacob Schoen took as his new partner his oldest son from his first marriage, Philip J. Schoen, and named the firm Jacob Schoen & Son.

In 1915, the Schoen & Molloy Funeral Home was founded in Covington and became Schoen Funeral Home, Inc. in 1955.

In 1935, the Schoen family acquired this beautifully landscaped and imposing funeral home, which has come to be a New Orleans landmark, considered to be among the most beautiful funeral homes in the United States. The building was originally built by the architects Favrot and Livaudais in the early 1890s as a home for the Tanneret family and was one of the finest residences on late 19th century Canal Street. In 1906, the home was sold to Mary Ellen Rehm Virgin.

When Virgin moved into it, it was an idyllic country setting of farms and a few scattered homes, three miles from the heart of New Orleans. It was converted in 1931 for use as a funeral home by four businessmen as the National Funeral Home. It was at this time the new owners converted it to the Romanesque/Spanish Revival style. Their goal was to build a chain of such funeral homes across the nation under the brand name National Undertakers. Their plan did not work. Eighteen months later, they sold the building to the E.J. Ranson Funeral Home, who operated it for a short time before selling the building to the Schoen family. For many years, the Schoens operated it as their auxiliary location.

During the 20th century, two major expansions transformed the original building into the impressive facility that it is today. The main lobby and additional parlors were added in 1957, followed by the addition of the chapel ten years later in 1967. The building was carefully restored following Hurricane Katrina to retain that historic look and feel that so many New Orleans families have come to expect.

Some of the elegant furniture in the funeral home came from the former House of Bultman, a long time funeral home located at St. Charles Avenue and Louisiana Avenue, which closed in 2005 after Hurricane Katrina.

1963 marked the firm’s expansion into Slidell with the establishment of the Schoen Funeral Home of Slidell.

Jacob Schoen & Son has been continuously operated by five generations of the Schoen family. Through more than a century of direct Schoen family involvement, personal dedication and sensitivity to the needs of families at time of loss, Schoen has become the preferred choice of the area families.

J. Garic Schoen served the city of New Orleans for over seventy years at the Canal Street location. Today, Jacob Schoen & Son is under the leadership of the fifth generation, Patrick Schoen, Managing Partner.

For more than a century, the Schoen family tradition has proven to be a foundation of great significance for Jacob Schoen & Son in building an institution of funeral service dedicated to the families of metropolitan New Orleans.

Compassion and consideration for New Orleans area families has been the guiding principle for the Schoen family and its many dedicated employees since 1874. Attentive personal concern and direct Schoen family involvement was a hallmark then, and still is today.

While our business has grown considerably since 1874, one special ideal remains constant: a keen understanding of, and an abiding respect for, the needs, wants, and likes of New Orleans area families and how we can best serve them to make one of life’s most difficult times a little easier. 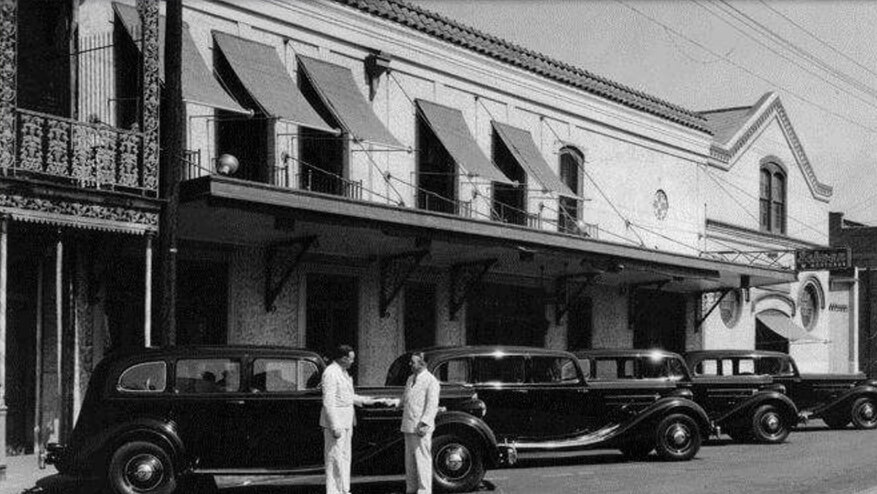 This photo is from 1935's Packard Limousine's national advertisement with Philip Schoen meeting the president of Packard after purchasing the four limousines.